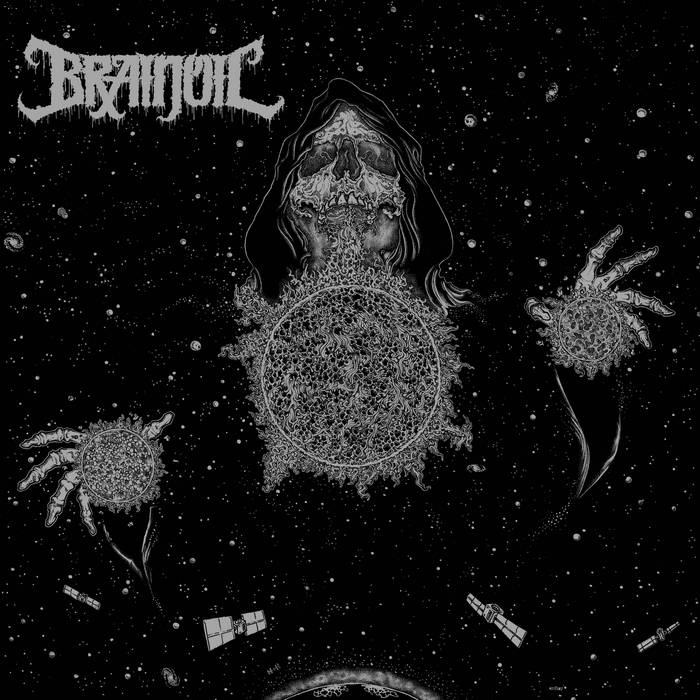 I have been following Brainoil since their beginnings, and this newest release is super fucking amazing. They have definitely come along way as a band, as their newest release "Singularity to Extinction" combines the scuziness of both old school Death and Sludge to create some nasty fucking tunes. The tones on this album are so fucking sick. When the the swollen catchy riffs mix with the death growl vocals, it's fan fucking tastic. The bass sound is fucking killer, and it really makes it's presence known on the slower sludge grooves. This is probably their heaviest release thus far. I really love the pacing on this album. It has the right mix of speed and slow sludge doom parts, not mention some solid mid tempo crunch. "The Spectre’s Vile Hand (The Shock Doctrine)" is a perfect example of this, and is easily my favorite track off of this release. It has a pretty memorable verse riff that I'm going to have a hard time getting out of my head. This is easily one of my favorites from this year. It's a banger of an album, and definitely their most brutal and savage to date. It's just primitive and raw, and it speaks to the lizard part of my brain telling me to run in circles and smash things with big rocks. Highly Recommended! Cheers! -Samir 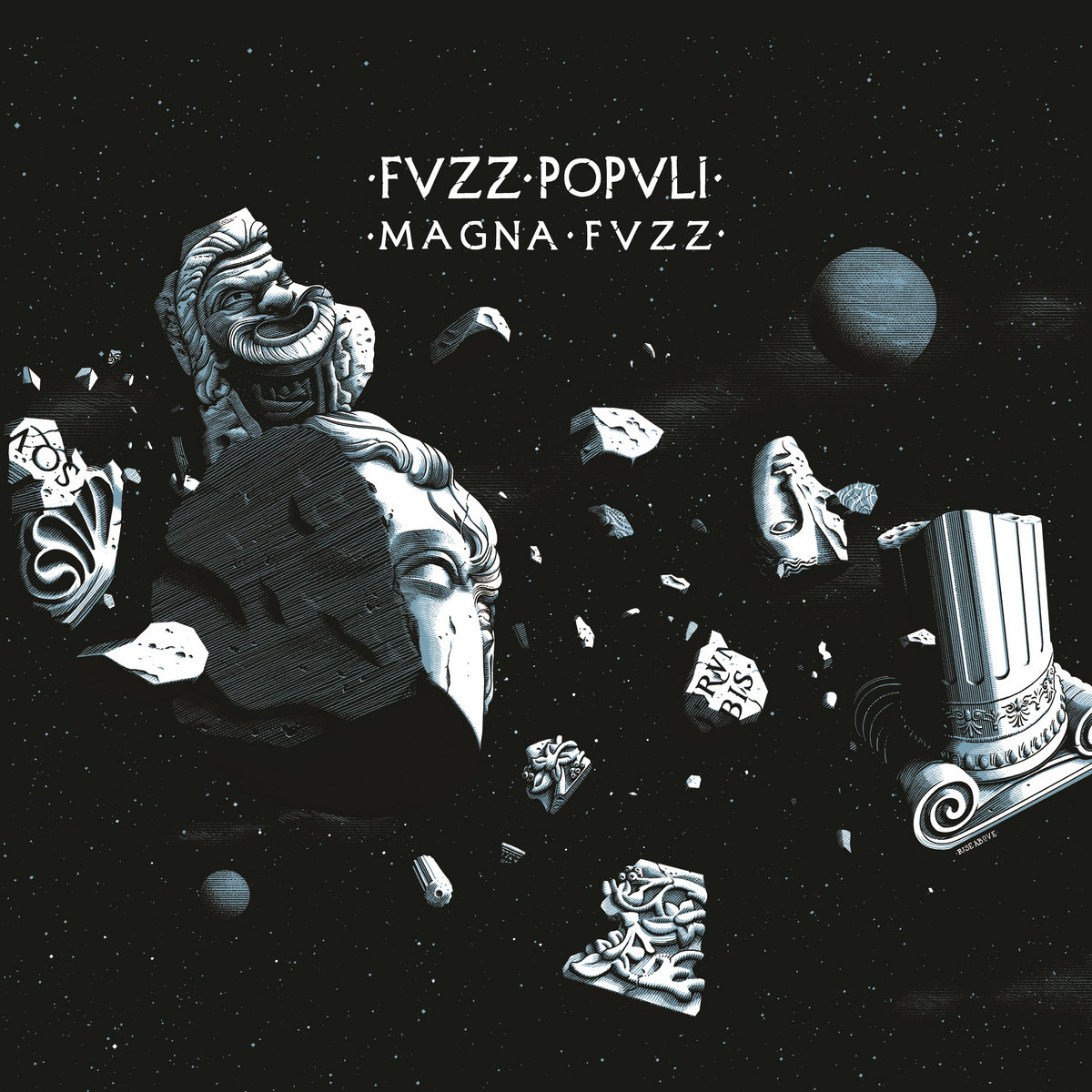 There are two things you're going to realize right away with Magna Fvzz. The first is that Fvzz Popvli does not like the letter U. The second is that there is an ungodly amount of fuzz on this thing. Taking heavy psych and mashing in chunks of stoner-doom and garage rock these dudes have conjured up a potent cloud of smog that'll make you dizzy. All these tunes are banged out with low-key chaos behind a murky lo-fi filter. "And Let It Die..." kicks the album off simply with upbeat drums and mangled distortion on a reeling riff before breaking out into hazy garage rock with manic, spaced-out vocalizations and eventually giving way to a classic sounding guitar solo ripe with wah. Afterwards on "Napoleon" the band treads through twangy waters for the first half of the song before dark vibrations worm their way to the foreground and turn the bright and blunted tones into doom. "The Deal" swings things back up with some unhinged psych-fed rock 'n' roll that gets heavier by the minute until "Get Me" cools things down with a sort of indie strumming punctuated by scummy outbursts. The drums and bass that open "Rvmpeltvm" might make you think the song is going to burst into some kind of party tune, but then a slow building phaser has things veer off into more abstract and aggressive directions. But fear not! It's followed up by "Cherry Bowl" which delivers on the dashed expectations that you may have had earlier and then some providing plenty of good times. Magna Fvzz closes with the title track, a long, sprawling, and spacey experience complete with extra keys that will lead you out to an extraterrestrial atmosphere and bombard you with cosmic outbursts between subtler movements. This album is a pretty wicked variety pack soaked in Fvzz Popvli's own brand of ultra fuzzy goodness, so check it out, cause there's probably a little bit of your favorite flavor in there. -Brandon 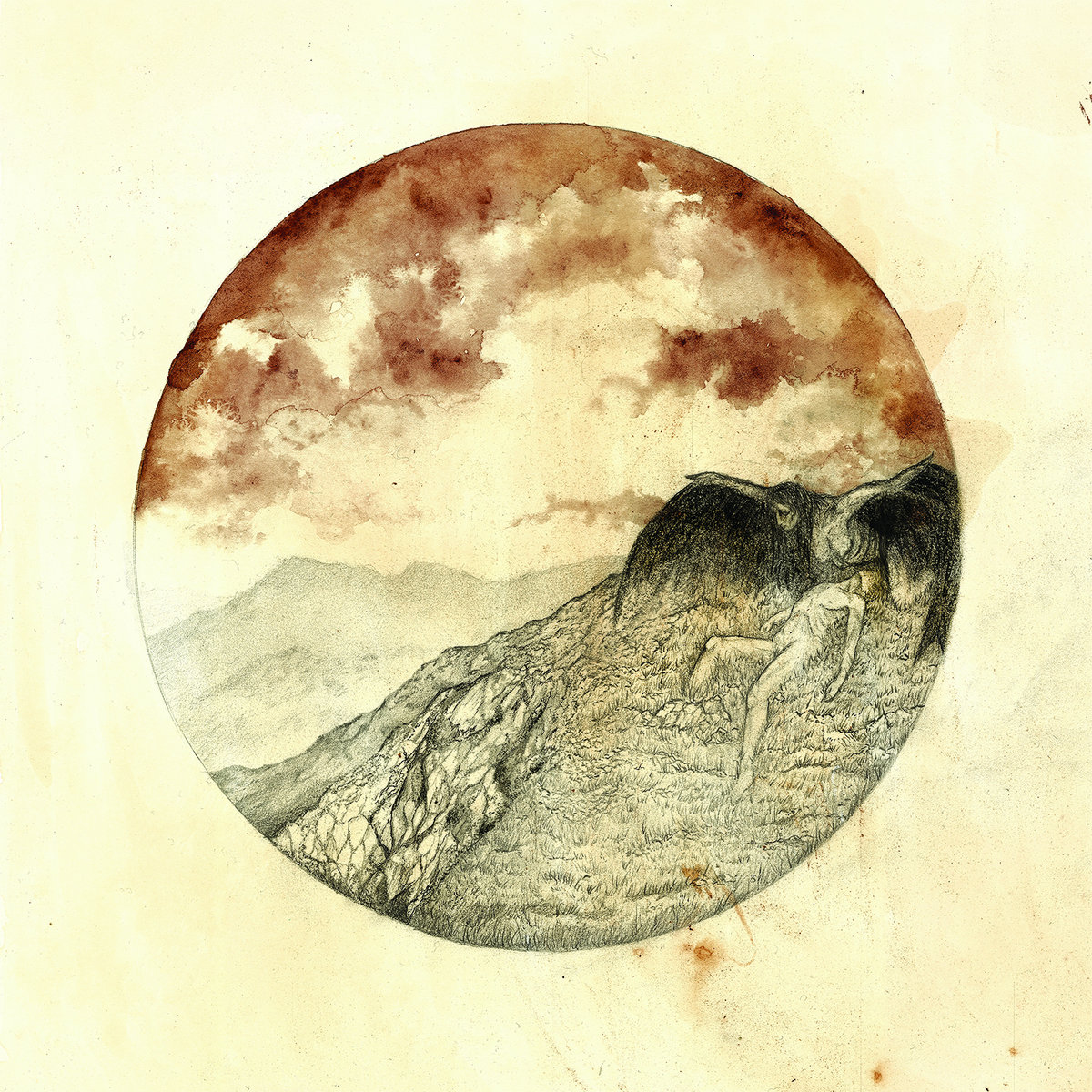 Fórn is a destructive force of misery slowly sweeping across the nation and consuming everything in its path. Submission will not save you - it only allow the inevitable to unfold sooner. On the full-length album "Rites of Despair" the band shows no capacity for mercy playing a brutal mixture of doom, death, and sludge violently stirred together and swallowed by a sea of gloomy anguish. Now tides are rising and the wretched swill is ready to devour all in its path. These songs roar slowly and dismally, with harrowing growled vocals and scathing riffs that make you feel like you're being crushed to death by a glacier. Rusty, melancholic leads emerge to wail over the tumultuous sounds of the undercurrent giving clear, agonizing melodies to latch on to. But for all of the album's cruelty and ruthlessness, it is by no means heavy-handed. Every third song is an atmospheric track (and there are plenty of similar moments in between) that will allow you to drown in a sense of emptiness and pain, feeling lost and alone for a few minutes before the extreme metal returns to grind you into dust. "Scrying Below the Wolf Moon" and "The Ancient Wisdom of Sorrow" are favorites of mine. Each finds a moment early on where they burst into visceral monsters and churn violently for a while, but then pause midway through for some quiet acoustic reflection burdened by woe - then pick the metal back up like they never stopped, now feeling even more forlorn than before. This is misery given a voice and you're going to want to hear all it has to say! -Brandon 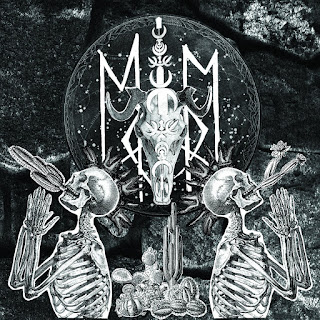 Never heard of MooM before until recently and I dig their sound. The band combines Powerviolence and Sludge to craft some pretty wicked tunes. Whether the music is played fast or slow, it makes no difference as the band crushes, kills, and destroys its way though six blistering tracks with gnarled riffs and cutthroat precision. I really dig the mix on this one. I mean everything sounds ravaged in general with loads of feedback and distortion, but the mix is just pristine, because everything is just coming at your so clearly without anything being muddled. It's really awesome because this is super pissed music, and the impact is just full force peal you skin off your face type shit.
The vocals on this definitely more in line with the hardcore aspects of Powerviolence and they are hoarse as fuck. Like I mentioned above with the mix, there's nothing muddled between the guitar and bass, as you can hear both of them cutting through on the mix, and they're pretty fucking fierce. The drums on this are pretty fucking sweet too. Nothing too technical but lots of great blasts and punk beats. The grooves and the riffs have got me hooked though. They're catchy as fuck, and nothing on this is filler. I'm glad I stumbled upon MooM, and I hope they release a full length at some point, because I'm pretty sure it would be and end of the year worthy release. The EP is super short, so make sure you listen to their other shit as well. Cheers! -Samir 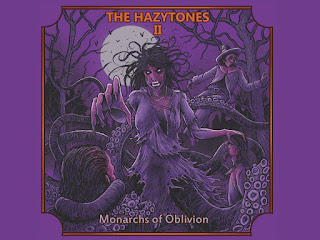 I really like the Hazytones, so I had no doubt that their second full-length album was going to be anything less than awesome - but even so, when I first listened to their new, mightily named release "The Hazytones II: Monarchs of Oblivion" I was still blindsided by how great it was! While their original self-titled album stuck mainly in stoner and heavy psych territories, this time around they've made things darker and doomier - and they weren't exactly full of sunshine to begin with! The Hazytones bring us tons of... well, hazy tones! Fuzz works its way through the soul of the sound at a swaggering pace with riffage wrapped around it and raspy reverberating vocals on top. The band manages to elicit the feeling of a cool autumn breeze through a graveyard without dwelling on the gloom or the terror, leaving a picturesque, slightly moody backdrop for some shady tunes. There's just a touch of the blues on here that peeks through from time to time - you can hear it on "The Great Illusion" as it chugs through the introduction before it disappears into the low, dusky, and vaguely mystical groove before it bursts through again during the guitar solo. My favorite track on here is "Hell" which starts out as a supremely catchy rock tune that will have you singing along, but then halfway through it dives into heavier waters and develops out of doom sensibilities. The two-parter "Monarchs of Oblivion" definitely stands out too, with Part 1 hitting some evocative vocal melodies and rock 'n' roll bounce while Part 2 gets into a sauntering doom. This is a great one for all the wicked folk out there who want to stir up the darkness! -Brandon


Facebook For The Hazytones
Posted by Super Dank Metal Jams at 7:43 PM No comments: 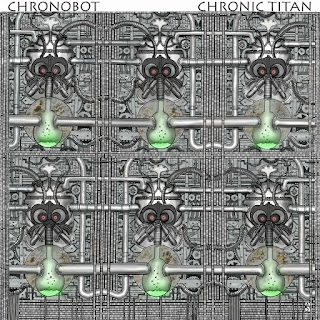 While at first you might think that Chronobot is a robot with control over time, it turns out that they're actually a band (that may have control over time)! Hailing from Saskatchewan in Canada these dudes are shaking foundations and warping minds with their new album "Chronic Titan". It's like Sleep's Holy Mountain played on a warbly record player in a haunted house - it's got big ass stoner grooves and riffs but takes plenty of dark turns that will have you wandering through a trippy nightmare. In addition to a mountain of riffs there's some wicked, shrill, possessed organ on here - half the time following the riff and the other half creating its own eerie avenues in the sound. "On The Level" and "Goblin King" show off some of those spooky twists on the more doom-heavy tracks complete with cosmic effects and whistles. But this album isn't a total creepfest and there are plenty of beefy, hard-hitting jams that will hit you like a sack full of stones. "Get Broke Or Die Tryin'" and "Laudercycle" take this approach with harsh vocals on slow grooving stoner metal that's going to crack a couple ribs just for fun! The opening track "Cheebacca" has it all though mixing the chilling organs with the catchy riffs to create a ghoulish party! I've been jamming this one over and over and I'm still not tired of it - check it out for yourself! -Brandon 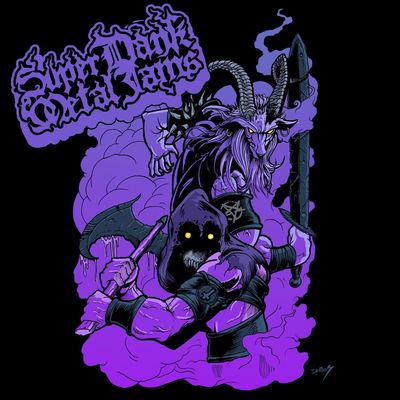 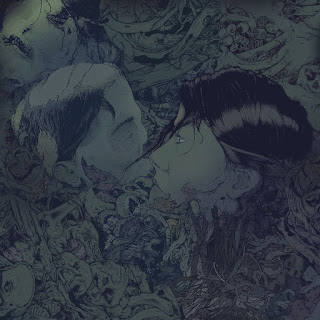 So I posted on our Facebook page about Corrupt Moral Altar more than a year ago, but failed to ever produce a review for them. I'm kind of shocked I didn't because this is really good shit. They're like the equivalent of getting your head repeatedly bashed into the pavement. This band is like the best of both worlds, dominating on opposite ends of the spectrum. The precision of the blasts and double kick are so flawless and brutal, yet at the same time "Eunoia" is like a weeping wound with putrid sludge oozing out. It's a constant barrage of super fucking heavy riffs, and blistering blasts. Yet it also seems like their musical tastes aren't limited to the genres already mentioned, as I can detect a little post hardcore in there as well. There's definitely a frenetic energy to it throughout the entire album, and it's quite relentless. I'm a big fan of the way the guitar and bass sounds in the mix on this one. The low detuned bass definitely comes out, and the strings together just produce this fat crushing sound. I'm honestly really surprised I didn't proclaim this band when I originally posted about them on Facebook, as my new favorite band. This is the kind of shit I am currently seeking out right now, and I can't get enough of. Seriously, send more bands my way that mix Death, Grind, and Sludge. Highly recommended! Cheers! -Samir