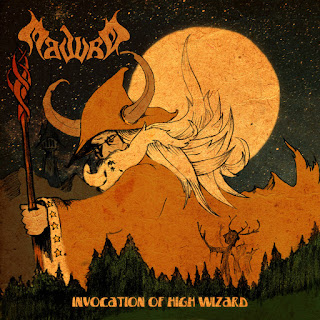 Upon a high mountain in Serbia, an incantation slips between a pair of old, wrinkled lips. Solemnly, with arms raised in the air and eyes closed in concentration, an ancient sorcerer recites a spell of ruin. At first, mere specks appear in the sky, but with each passing moment they grow larger until they are recognizable as a swarm of meteors set to crash upon the earth. This is the work of Madvro, a band that has damned us all with their debut album "Invocation of the High Wizard". We're all doomed, but it's going to be a hell of a ride! This is an album that hits both the highs and lows of stoner doom, combining rocking stoner grooves with a sense of impending terror, but the stoner-to-doom ratio varies from song to song. "Mouth Breathers" leans hard on the stoner side of things with plenty of upbeat swagger and only a twang of foreboding in the vocal tone to cast the shadow of fear across your soul. But "Healing the Good Child of God" takes the opposite approach with plenty of unfiltered doom - dreary, slow, and heavy. I kinda hear a touch of The Sword through it all, but if they had gone in a darker, more ominous direction. No matter what you're getting at the moment though, you can be sure that with every track you're going feel the ground shaking. It could be the massive riffs blasting through your speakers and making the whole building rumble or maybe it's just the earth trembling as doomsday approaches. Perhaps the best way to understand this album is through the last track "Mud Giant". Just think of the sound as a massive creature made of muck, towering over the land, spreading horror wherever it treads, and coating the world beneath it in sloshy filth - but within that the vague notion of humanity. However you want to think about it, it's really good shit, so I suggest you listen before the wizard's invocation kills us all! -Brandon