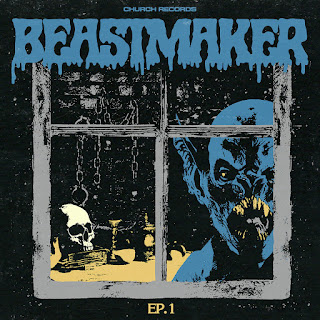 I was quite surprised to see a new release from Beastmaker, but according to guitarist/vocalist's Trevor William Church's Facebook, this is the first of a string of EPs using unused tracks. Also mentioned in his post is their departure from Rise Above Records, and the band's new direction moving away from "Horror Doom" and even taking on a second guitar player. Beastmaker is definitely one of my favorite newer Doom bands from the past five years, so whatever they plan on doing, I will be sure to listen to it, just like I did this one.
Right away I noticed a slight difference in the way this batch of songs sounded compared to their last two LPs. The Horror Doom sound was definitely there, but it also seemed like they were definitely going for a Proto Metal vibe as well. The riffs were simple yet catchy as always, but it definitely had a more 80s metal/hard rock influence to it, which kind of made me think of Ghost if they were actually a Doom band. The solos fucking ripped as well. Overall, I liked what I heard. I'm looking forward to the next couple of EPs, with the band finishing up this chapter of their musical journey, only to open a new chapter with a fresh start shortly thereafter. Cheers! -Samir