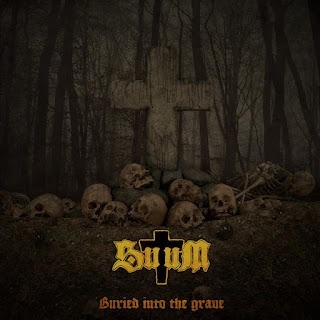 Stumbling out of the forest, looking pale and practically undead is SuuM - a band who seem to have sustained themselves on nothing but traditional doom for months. They're now here to indoctrinate you into their wicked lifestyle with their debut album "Buried Into The Grave", an offering set upon a profane altar in the middle of a mausoleum. It's based on a classic style that sits well next to the likes of Saint Vitus or Reverend Bizarre, but feels just a touch more modern. This stuff broods in the darkness as an ominous storm brews overhead, complete with a few thunderous explosions when songs burst into an occasional rage. The first track "Tower Of Oblivion" does well to announce the band's dark intent as the guitar lies down a thick layer of slow-churned dreariness as a foundation before the vocals moan over it with infernal lament. Add in a practically maniacal solo followed by a maddening build up with a vigorous grumble from the drums and you'll soon find your eyes glazed over as you give in to the gloom. The rest of album continues in a similar direction - groaning nefariously through the night - until "The Woods Are Waiting". This one is a moody instrumental with simple, sorrowful guitars and a touch of the blues - it's few moments respite for you to reflect before the end. With the final track "Shadows Haunt The Night" all the lingering spirits in the crypt seem worm their way out into the world, presumably to go forth and bring the essence of SuuM to all. Even if you don't check this one out, you may hear the dead whispering its praises as they pass over you in the night! -Brandon