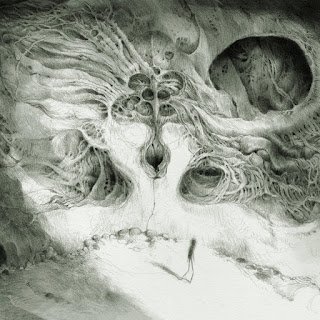 Wastes deliver punishing funeral/death doom from France, that speaks to the pain, suffering, and sadness endured by living in this dark universe. Each sorrowful grief stricken dirge packs a heavy blow, and hits you hard with it's meaty death metal sound. The vocals and pacing are just spot on. This album goes about as fast as a group of pallbearers heaving rather than carrying a concrete tomb in the mud during a heavy downpour until it reaches it's destination, which is a hole in the fucking ground. There's like one time that the drums play something that resembles straight up death metal or thrash beats, but that's all youre gonna fucking get here. The vocals are fucking killer. They have that classic death growl that is full and bellows with despair, while at other times it shrieks with anguish and animosity. This album is the perfect soundtrack for the rainiest days and the grayest skies. It's straight forward in it's execution, but there's an eerie layer of atmosphere that is ghastly and ominous, if not somewhat supernatural, that makes this stand out amongst the rest in the graveyard. I could listen to this kind of shit for hours. So yeah I obviously really liked this one. Cheers! -Samir

Facebook for Wastes
Posted by Super Dank Metal Jams at 6:17 AM