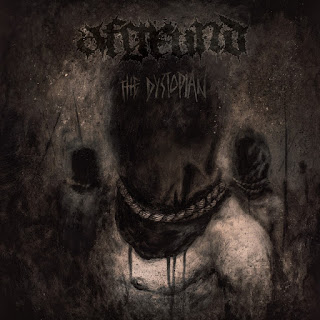 Opening up with Robert Oppenheimer saying "..Vishnu takes on his multi-armed form and says now I am become death, the destroyer of worlds", Afgrund begins to devastate your ears with an onslaught of blasts, buzz saw guitars, and harsh guttural screams that threaten to lay waste to everything in its path. The aptly titled "The Dystopian", the new release from the band, is definitely appropriate listening material for the end times, as the four horsemen of the apocalypse come riding in. When societies collapse, and disease and famine take their stranglehold choking their life out of the remainders of the human race, expect Afgrund's "The Dystopian" to be the soundtrack to that. These dudes have a nice fat sound, that is both grimy and full. Most of which comes from the detuned string section. The guitar player sure loves his HM-2 pedal as that's where they're getting that nasty classic tone from. Fortunately enough this doesn't drown out the distorted bass, which is deep fills void that is likely to pound you into the earth until you're nothing but a plume of dust raining dirt down. The vocals are spot on, especially for this sort of grind/crust sound. It's the right balance and harshness of growls, shrieks, and shouts. Then it's finally rounded out by the drums, who's sheer brutality alone will summon any sort of beast for war. The blasts are fucking blistering, and the tunes themselves can shred away your face like a belt sander would, but when these dudes settle into a slow to mid paced groove, that shit is sweet too. What a way to start out the new year with a release like this. Nothing says welcome to 2018 like a grind release as pissed and heavy as this. Afgrund has set the bar high for whatever I review next. They're definitely going to be a hard act to follow. I wouldn't be surprised if this ends up on my end of the year list, as this is a serious contender that can't be fucked with. Highly recommended. Cheers! -Samir