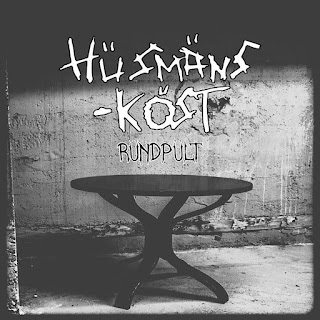 So for the last four months, I started doing overnights for the first time in my life, and I found that the only type of music I could really listen to that wouldn't make me sleepy was Grind, Death, and PV. If it had a blast, I was going to check it out. So I have been exploring more and more shit on YouTube, despite Super Dank being a blog that mainly focuses on Doom Metal and its subsequent sub genres. Along the way I discovered Husmanskost's first album "Fåricore", and I thought it fucking ruled so I put it on Facebook. Well here's their brand new one "Ründpült" and this shit just rips.
I mean these dudes are straight full speed Grindcore with no filler. There are definitely some crossover elements in here as well, where riffs seem to be thrashier than most, and I totally dig that. Then there's the dissonant atonal chord pairings that make this stand out for sure. I think the two biggest things I can take away from this recording is the face the production is so flawless. Guitars have a pulverizing crunch, but when paired with the rest of the band each instrument comes out in the mix crystal clear, which is great, and not always the case when listening to Grindcore. A lot of times i'll hear blasts, and the guitar parts will get lost in the mix from playing at blistering speeds, but on this release it's definitely not the case. It's not to say this thing isn't a noisy fucking beast, because it's definitely got some teeth, and it's both heavy and ferocious. The other takeaway is the samples. I have no fucking idea what anyone is saying, and they just seem so random. The only sample I knew for sure was the angry german kid, which I have provided for those who need a refresher on their meme history.

So, going along with my recent review I did for Slund, let this be the first of many reviews that stray away from all the Doom stuff, and focuses on the fast and heavy stuff a little bit more. I've got a soft spot for the Sludge, but for the most part I think Brandon is definitely going to be your Doom man going forward, unless there's some gnarly Super Dank Stoner shit I share with everyone. Anyway, check this shit out for sure. Cheers! -Samir